by Energía 16
in News, Topics in Energia16 print version
0

The surprise attack on two refineries in Saudi Arabia in mid-September once again evidenced the fragility of the global oil market. This event prompted U.S. President Donald Trump to authorize the release of oil from the country’s Strategic Oil Reserve to stabilize the international crude market, which prices are fluctuating due to the uncertainty of an economic slowdown, the symptoms of a global crisis, and the threat of a military confrontation with Iran, which resumed nuclear activities in response to U.S. sanctions.

In this edition of Energía16, we take a look at the United States and its effort to assume the leadership of the market and which Strategic Reserve, administered by the Department of Energy, contains roughly 645 million barrels and is the world’s largest emergency crude deposit.

Over the past decade, the United States has managed to double its oil production to 12.3 million barrels per day (bpd), standing as the top producer worldwide. This year, thanks to fracking – a technique used to accelerate oil production – the country toppled Saudi Arabia.

With the title “Good news for the Spanish wind sector,” we highlight relevant aspects in this industry, since in 2018 Spain was the third country in the world in terms of the net value of wind power technology exports, a field where 207 operative centers are working to manufacture equipment for the installation, expansion, and repowering of wind farms. In this period, the country also prevented the emission of about 25 million tons of CO2 per year.

This October-November issue of Energía16 also addresses the challenges and opportunities brought by the energy transition in Spain, Cepsa’s leadership in the chemical industry, and an interview with Paola Serrano, Chief of Regions and Markets Officer for LATAM & International in MAPFRE Global Risks, who assures that many companies in Latin America are not only mature but also have first-level innovation when it comes to facing risk management and adapting their strategy. 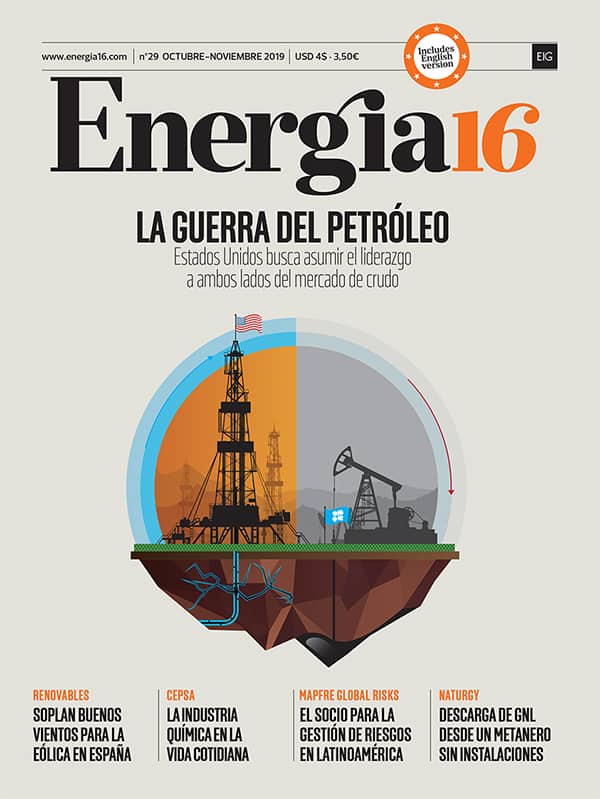 The coronavirus response will determine the pace of the energy transition

It is too soon to say whether the crisis wil be a stepback or a catalizer for the energy transition.

Petróleos de Venezuela is unrecoverable and will have to start from scratch, experts say

It could be incorporated into a chip to create a battery that provides unlimited low-voltage clean energy.

Authorities announced these projects meant to move toward a carbon neutral economy.

The MIT to build Sparc fusion reactor in 2021

According to Musk, the company's new goal is to offer a $25,000 electric vehicle.

This decision comes in the midst of a severe wildfire season caused by climate change.