by Energía 16
in Europe, News, Renewables
0

The European Union needs to take significant action to generate more electricity from wind and solar power and meet its targets for renewable energy, according to a new report by the European Court of Auditors.

According to auditors, both wind and solar power have recorded strong growth since 2005, there has been a slowdown since 2014.

⚡️ The wind and solar #photovoltaic power sectors currently make up the largest share of #renewable electricity, and falling costs make them an increasingly competitive alternative to burning fossil fuels 🍃

At the same time, the auditors warn that Member States will face a significant challenge in trying to meet their 2020 renewables targets.

“Member States incentivized investment in wind and solar power, but the way they reduced support deterred potential investors and slowed deployment,” said George Pufan, the Member of the European Court of Auditors responsible for the report. “The slowdown in shifting towards renewable electricity implies that we might not meet the EU 2020 target.” 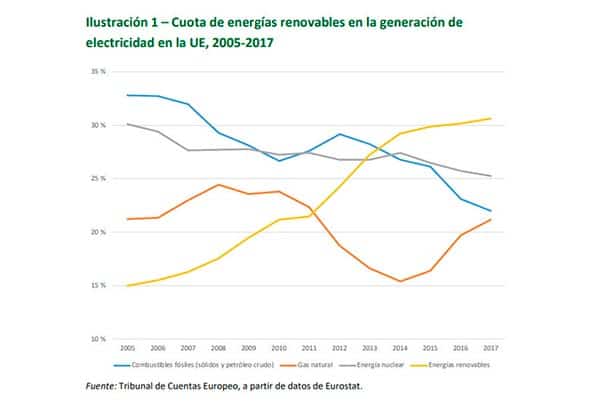 The EU aims to generate a fifth of its energy from renewables for electricity, heating and cooling and transport use by the end of 2020.

The wind and solar photovoltaic power sectors currently make up the largest share of renewable electricity, and falling costs make them an increasingly competitive alternative to burning fossil fuels.

The auditors assessed the progress made by the EU and Member States towards the renewables targets. They went to Germany, Greece, Spain, and Poland to examine whether financial support for electricity generation from wind and solar power had been effective. The auditors found that initial support schemes had been over-subsidized in a number of cases, resulting in higher electricity prices or increased state deficits.

In 2014, when Member States eventually reduced support to lighten the burden on consumers and national budgets, investor confidence was dampened and the market slowed down.

Eleven EU countries have already met their climate goals. However, it is unlikely that the Netherlands, Ireland, United Kingdom, Luxemburg, and Poland will meet their individual target by 2020, according to the TCE report.

Every one of these members should increase renewable dependence by 4% from 2017 levels.

Other eight EU members, including Germany and Spain, must also accelerate their transition to renewable energies in order to reach their goals, the document adds.

There is a possibility that the member states will not achieve their national goals. This would threaten EU’s target to obtain 32% of their energy from renewable sources by 2030.

Ten EU members have already achieved their goals for 2020, including Switzerland, with the highest compliance percentage at 54.5%. On the other hand, Luxemburg and the Netherlands have the lowest compliance with 6.4% and 6.6%, respectively. 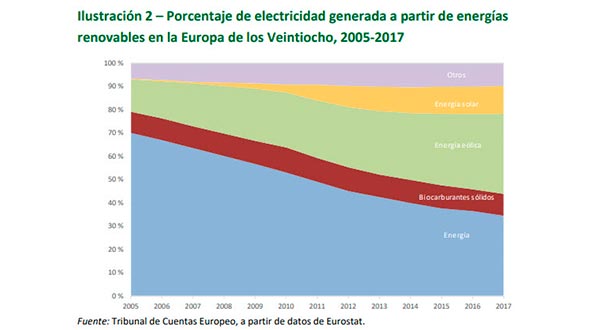 Risks for the renewable goals

France is one of six EU countries that will probably not reach its renewable goals by 2020. This threatens the EU’s 20% goal, the Bloc’s auditors say.

The nation is lagging behind in its attempt to have renewables account for 23% of its energy mix by 2020, the report from the European Court of Auditors revealed.

According to the auditors, current regulations do not guarantee timely reports on the progress made with renewables. The Commission lacks a way to approach the slowdown in the shift to renewables.

According to their assessment, without binding national targets, it will be difficult to achieve the renewable goals of at least 32% by 2030.

They also warn that reaching this goal will require considerable public and private financing, in addition to EU resources.

To improve the situation, they make the following suggestions:

Greenpeace: Spain is the EU country with the most environmental challenges

Greenpeace: Spain is the EU country with the most environmental challenges

Hydrogen as a lever for change, the engine for green recovery, and a key element in the energy transition, that...

Venezuela’s oil production has been decreasing over the past decade due to inefficiency and corruption. A trend that has accelerated...

Researchers at Linköping University working on generating energy from sunlight

All the energy we use on Earth comes from the Sun. The principle is simple. Plants use sunlight and carbon...

The U.S. government halted scheduled gasoline deliveries to Venezuela. Washington threatened to sanction the Greek-owned vessels transporting gasoline and other...

Renewables in the face of the pandemic: between optimism and caution

Across the world, lockdown measures to try to contain the spread of COVID-19 have led to economic contraction, causing a...

The Vice President of the Economic Area in Nicolas Maduro’s government Tareck El Aissami confirmed that the Fortune – the...